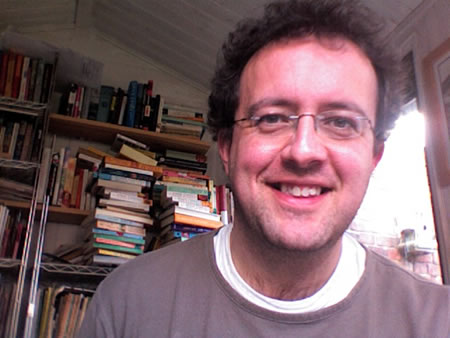 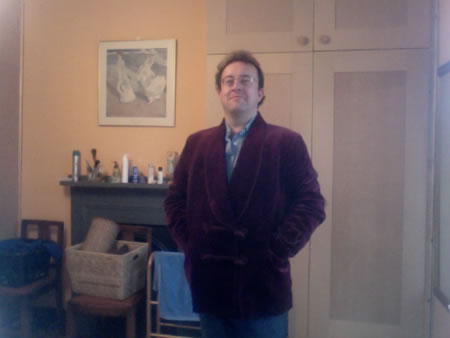 Every Monday we feature a mumpreneur who’s ready and willing to open up their lives to us.  They share with us their motivation, challenges and proudest moments in business and they also tell us how they take time to nurture themselves. It’s lovely to have them here at Mums Got A Business and we hope you enjoy connecting with them too.

As you can tell from the title today we are delighted to introduce our very first Dadpreneur to the site.  I met Alex a few years ago via Enterprise Nation and have had the honour of guest blogging on his site.

He's a great example of balancing home working with family life and I'm always interested to see what he's up to next.

I've allowed him two photos with his profile as he really wanted to show off his favourite smoking jacket.

I love his wit, I hope you do too.

Your name: Alex Johnson (I prefer Alexander but my mother is the only one who calls me that)

Brief description: Shedworking is a daily updated lifestyle guide for shedworkers and people who work in shedlike atmospheres. Bookshelf is the home of interesting bookcases, bookshelves and things that look like them

Where do you live? St Albans, Herts

PC or Mac? Almost entirely Mac but I have to use a PC for my work with The Independent (long story...)

Tell us about your business

I'm a professional blogger and freelance journalist which means I spread myself quite thinly (I'm part of the online team at the Indy and an editorial consultant for some charities plus some social media coaching). My 'own' business is Shedworking which looks at the ins and outs of homeworking with special emphasis on garden offices - I'm a one man band and look after all aspects of the business which is completely virtual apart from the book of the blog - Shedworking: The Alternative Workplace Revolution - which came out last summer. The beauty of it is that Shedworking is flexible to run since I only really work two days a week and look after the children on the other three.

What motivated you to become a dadpreneur?

A mixture of wanting to see the children as much as possible while they were young and the opportunity to let my ego run free and do exactly what I want with a 'magazine' rather than rely on other people (which I had to do as a 'proper' magazine editor).

What’s been your biggest challenge in business?

Learning how to sell ads. I used to be horribly pious about journalism and look down on the ad teams. Now I realise what a hard job it is. I'm still not marvellous at it but I'm not as useless as I was five years ago.

How have you overcome it?

What’s been your proudest business moment?

Being used as an example of the way technology has brought greater democracy to media/publishing in a conference speech by Richard Eyre, former Chief Executive at Capital Radio, ITV and Pearson TV and currently chairmen of the Internet Advertising Board (he also called Shedworking 'downright loony' but let's not dwell on that)

What’s your catchphrase or favourite quote?

At the start of Woody Allen's film Manhattan, he's trying out different ways of starting his new book. This is his, and my, favourite: "Chapter One: He was as tough and romantic as the city he loved. Behind his black rimmed glasses was the coiled sexual power of a jungle cat . . . New York was his town. And it always would be." When I started my first job as a journalist, the editor's PA asked me what name I wanted on my business cards. I felt 'Alex Johnson' was a bit dull and something a bit more dynamic would work better so asked her: "Could I have 'Junglecat Johnson' please?". She said no. I've managed to get a few friends to use 'Junglecat' as a nickname over the years and even called my social media coaching business Junglecat Media

What do you do to relax or nurture yourself?

What was the last treat you bought for yourself?

I had two nice pints of Doom Bar on Sunday

Favourite flowers: Lupins, not least for their name

What one piece of advice would you like to give to a new dadpreneur?

Don't feel you have to be spectacularly successful, earn millions and work every hour God sends - being moderately successful is absolutely fine.

Fancy featuring as one of our amazing mums or dads? Drop me an email over on the contact page and I’ll be in touch.   And remember to drop by every Monday to welcome our latest profiled mum.

Heather Bestel helps mumpreneurs grow their business and love their life. She's an award winning business coach, psychotherapist, author and mum. She believes in daily dancing around the kitchen and celebrating everything {with tea and cake} x

Testimonials – If you don’t ASK – you don’t get!
Monday Mumpreneur with Helen Lindop

Some of our articles will contain affiliate links for recommended products or services. We may receive commission for any resulting sales. Thank you.
Mum's Got a Business © All rights reserved
https://phentermineabc.com|https://antibioticsall.com|https://clomidrxshop.com|https://nolvadexmed.com|https://valtrexmeds.com